An Airborne unit of the US Marine Corps, the Paramarines were formed in 1940 and disbanded in 1944. This grouping is named to World War II USMC parachutist PFC. George Patsko and includes his US Marine Corps Parachute School certificate dated May 4, 1943.

Next is a photo of his parachute school class, a group of Marines wearing their jump wings, and a jump platform visible in the background. It was taken at Camp Lejeune, NC. The lot also includes his dog tag with a tetanus date of September 1942, listing his serial number #433037.

In 1944, when the Paramarine units were disbanded, many of the parachutist-qualified Marines were transferred to fighting units within the 5th and 6th Marine Divisions. Newly promoted Corporal Patsko was sent to the 5th Marine Division and went to Iwo Jima with the 1st Battalion, 26th Marines, where he was awarded the Bronze Star medal for heroic achievement on February 26, 1945. He was wounded in action on March 16, 1945.

Included in this grouping are his full-color temporary citation signed by Maj. Gen. Thomas E. Bourke Commanding general, his Purple Heart order signed by General Holland M. Smith, and his original discharge papers dated October 25, 1945. The discharge lists his qualifications as a "Rifle Sharpshooter" and "Parachutist” and also confirms his service on Iwo Jima from 19 February to 17 March 1945 as well as his wounding on Iwo Jima on 16 March 1945.

In addition to the paperwork, his medals are present. There is a slot brooch Bronze Star medal with ribbon bar and "ruptured duck" discharge pin, as well as a Navy/Marine Corps-style (squared case full wrap brooch) Purple Heart medal with wide-style ribbon bar and lapel pin. 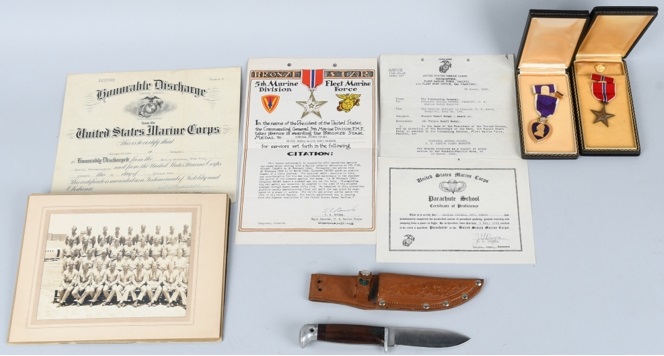 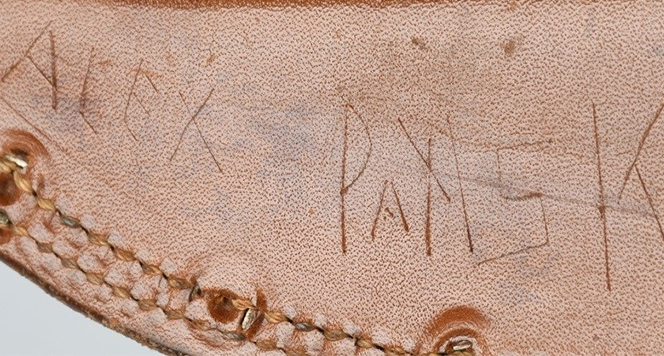 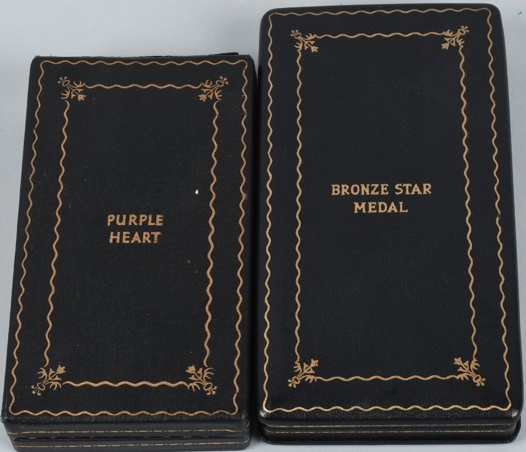 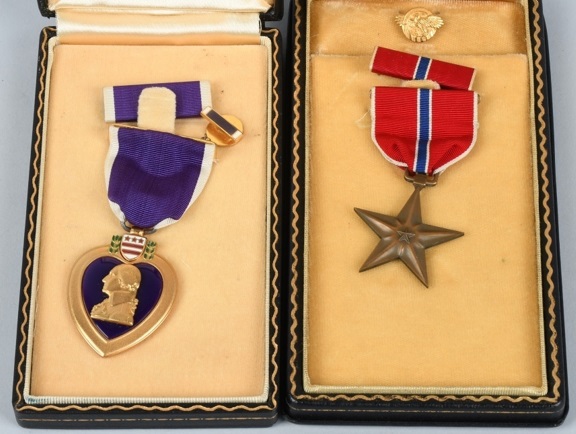 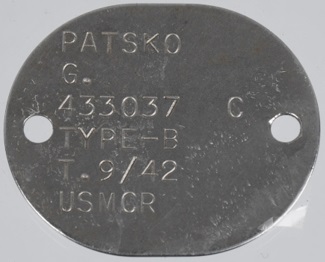 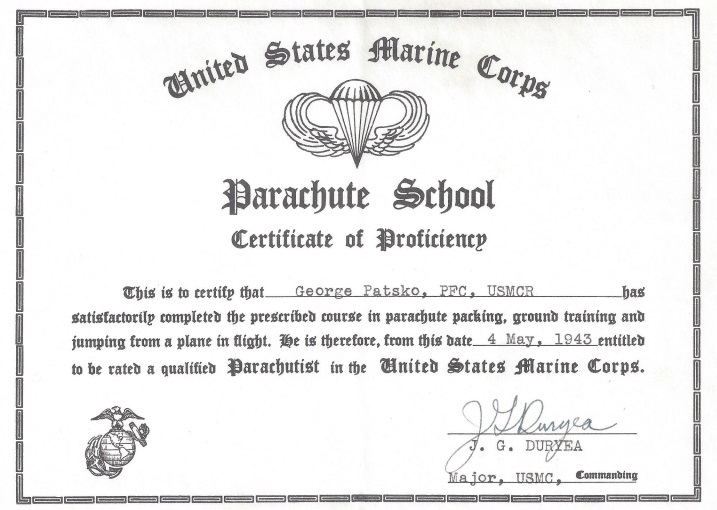 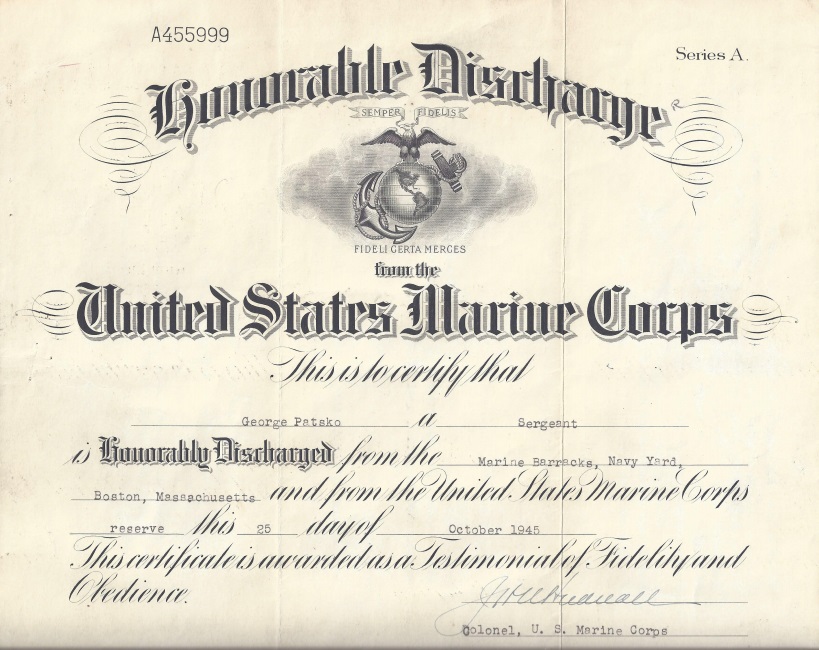 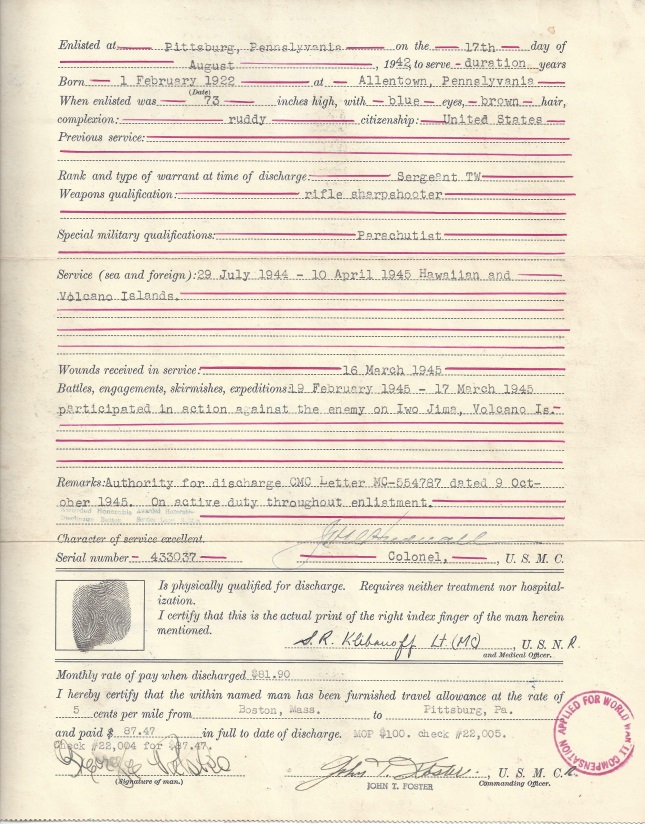 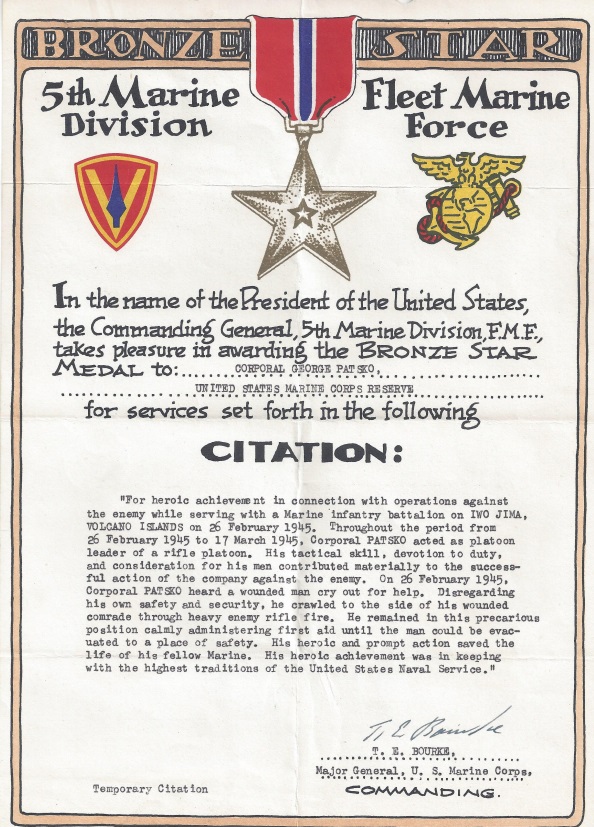 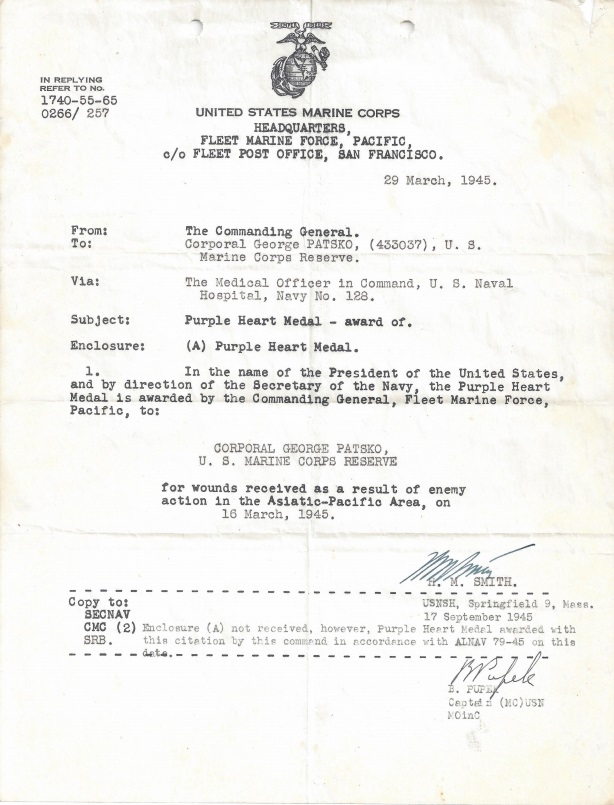 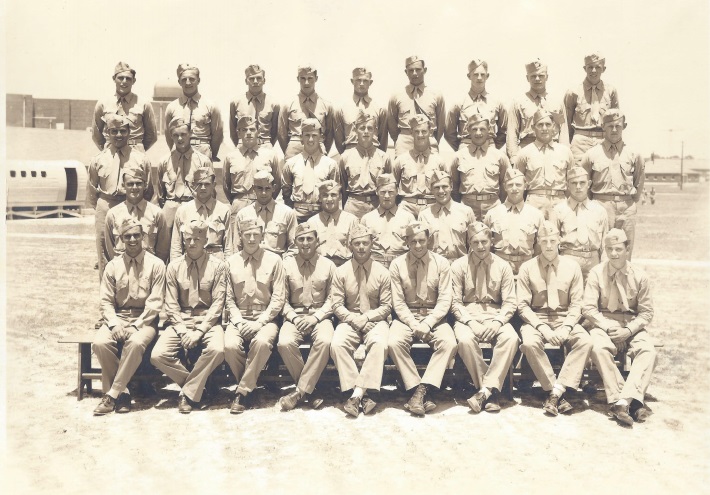 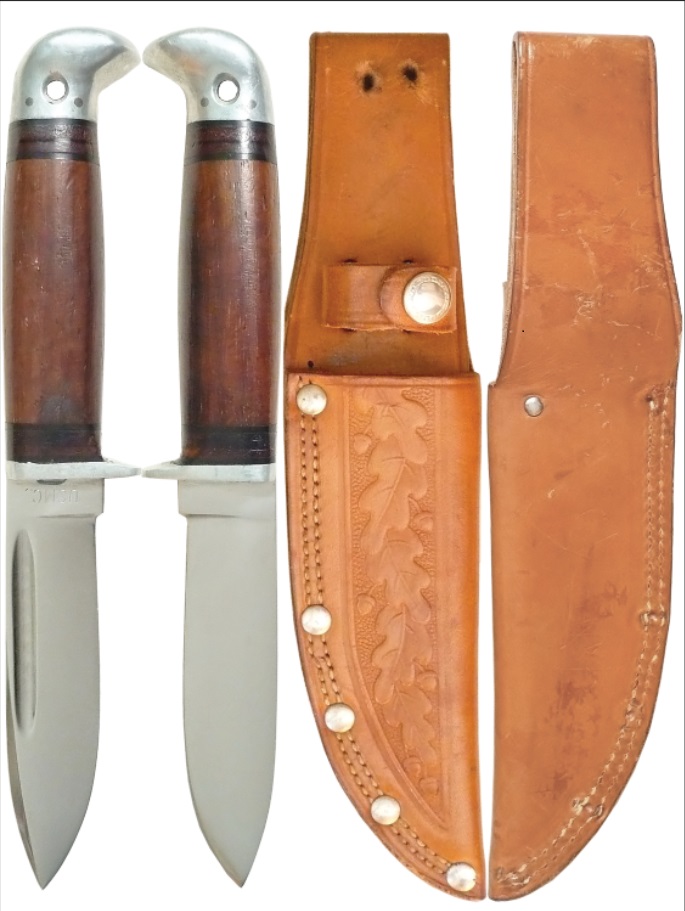 Clarence R. Huebner (1888-1972) commanded the 1st Infantry Division, popularly known as the “Big Red One,” in early August of 1943. He led and joined his men during the D-Day landings on June 6, 1944, where they were the first force to face the Germans on Omaha Beach. Their division was instrumental in the breakthrough following the battle for St. Lo and in foiling the German counteroffensive at Mortain.

After the Allied breakout in Normandy, the division arrived at the German border in early October of 1944. This is also where it was committed to battle at Aachen, which they captured after two weeks of heavy fighting.

After experiencing heavy fighting in the Huertgen Forest, the division briefly rested but soon returned to counter the German offensive at the Battle of the Bulge in December 1944. In January 1945, Huebner was named commander of the V Corps. He commanded its advance to the Elbe River, where elements of the corps made the first contact with the Soviet Red Army.

By the end of the war, the division had advanced into Czechoslovakia. Following the German surrender, Huebner served as the Chief of Staff for all American forces in Europe and was named the final military governor of the American occupation zone in Germany in 1949.

Brehon R. Somervell (1892-1955) was the Commanding General of the Army Service Forces in World War II and was responsible for the US. Army's logistics. He also oversaw the construction of the Pentagon from 1941-1943.

His M3 is a fine example of a custom Pal M3 fighting knife with an association with two notable U.S. Army generals. This is the only Pal M3 with a high-polish blued finish that I have observed. The obverse of the blade is marked “U.S. M3 PAL” for the Pal Cutlery Co. of Bridgeport, CT. The reverse of the blade bears the electro-pencil presentation which reads “To Major General Clarence R. Huebner/From Lieut. Gen'l Brehon Somervell.”

The knife is housed in a 13 1/2-inch long light brown leather scabbard, decorated on the obverse with Huebner's two general's stars and the insignia of his command, the 1st Infantry Division, and a flower and oak leaf motif. His incised name “Major General C.R. Huebner” is in the reverse, indicating that he received the knife following his promotion to that rank in the summer of 1943. 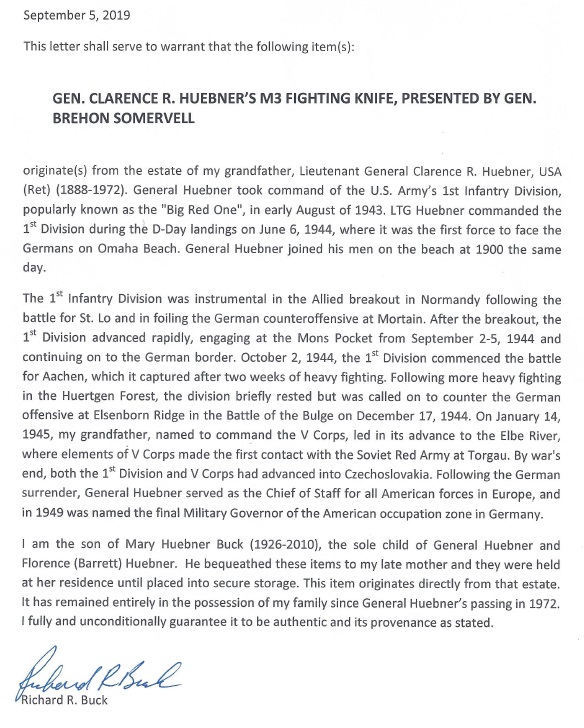 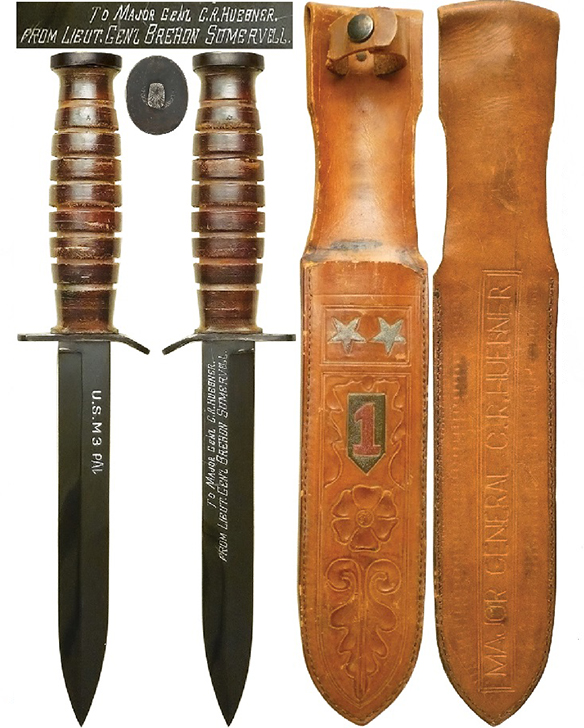